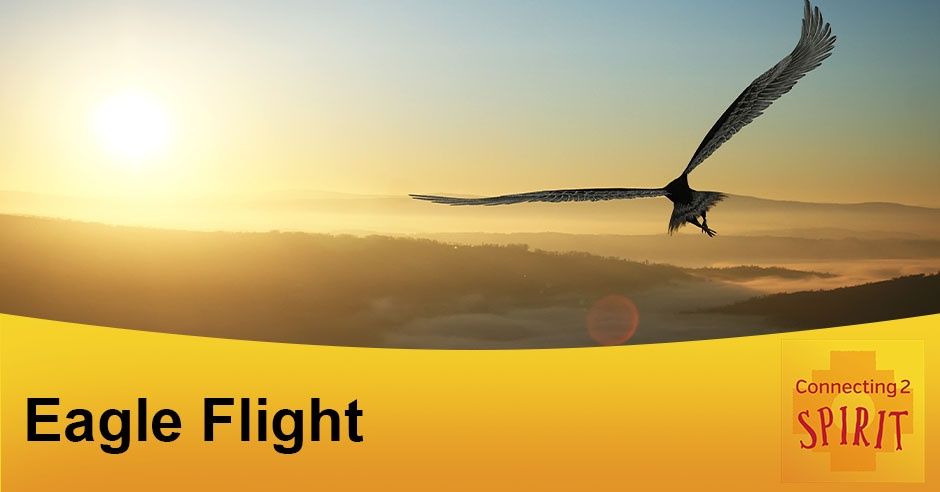 Have you ever dreamt of flying? What does it feel like? Humans as we are, we think we are not capable of doing something as majestic as soaring up in the air and just letting go. Susan Norton has the experience to share that shows how the impossible can become possible. Join her in this eagle flight, where she became one with her spirit.

A few years ago, I was on a tour with a Peruvian shaman and a few other people in the area near Lake Titicaca in Peru. We did a ceremony with the shaman and we were walking near these high mountains and we came to this one area where the mountain split. There was this ledge, it had a huge drop-off and he had us go to this ledge and call out something that we wanted to bring out to the world. Something that we wanted.

We called out and we could hear the echo come back to us. I had this profound sensation of wanting to fly off that cliff. I wanted to soar. I felt like I want to leap off that cliff. I went to the shaman and I said, “I want to leap off this cliff. I want to fly. This is what I feel like doing.” He says, “Do it.” I said, “What? Excuse me, I can't fly. I'm a human.” He says, “Do you have a strong belt?” I looked down and I did have a strong waist belt on. He had me face this cliff on the edge of the cliff and he hung onto my belt.

The impossible can become possible.

He put his hand on my shoulder and said, “Relax, let go of your body, leave your body.” As he held onto my waist band, I leaned forward and opened my arms and I began to fly. I found that it's not that easy to soar. Eagles, condors and hawks make it look so easy like, “Soaring is easy. I'm not even flapping my wings.” I found out that when you're lifted up like that, you're using energy to maintain that soaring position. I was very excited. I'm like, “I’m soaring. I’m up.” I could look down and I was thinking to myself, I should go higher. The shaman behind me says "Go higher"  I went higher. I was soaring. The people in my group were going, “Look at that!”

My eyes were closed, but I could see. I was soaring and it was magnificent. I had left the cliff that I soared. It was beautiful. I came back into my body, back into the cliff edge. The shaman looks at me and says, “Good job.” I came back and I was like, “What were you guys saying? What was this, ‘Look at that?’” What happened was when I was soaring, directly over my physical body was a bald eagle doing the exact movements that I was doing at the same time. That's what they were responding to. That's what they saw.

I had left my body and joined an eagle in flight and there was witnesses and I was in a safe, protected place with a shaman. It was one of the most amazing experiences of my life. Eagle is one of my power animals and this was such an honor and a privilege to let that Eagle have me join it or I joined him or he joined me. I don't know - we were one. It was amazing. I was so moved. We all began to walk away and I'm thinking to myself, “Why don't these people want to do this also? This was amazing.”

Everybody's different, they didn't need to do it, but they were a witness to it. I felt something. I asked for the impossible. It was not possible to fly. I asked the shaman and he says, “Fly. Leave the cliff.” The impossible can become possible. It’s possible maybe just not the way that we think it is. One of the reasons that I love doing the work that I do is I get to walk outside of ordinary reality, be one with spirit and come back fully to my body and be who I am and be this woman in New York or wherever I am.

Soar. Have a ball. Don't let anything stop you. There are ways.

To be human is such a gift. When I can join with spirit on this human journey, it's a blessing. Soar. Have a ball. Don't let anything stop you. There are ways. You might not need to be on a cliff edge. You could soar from your bed. You might feel connected with your cat. Ask, feel and receive. Thank you. If you want to find out more or talk to me, I would love to hear from you. You can write to me or textSusan@Connecting2Spirit.com. Blessings.