Connecting you to Spirit 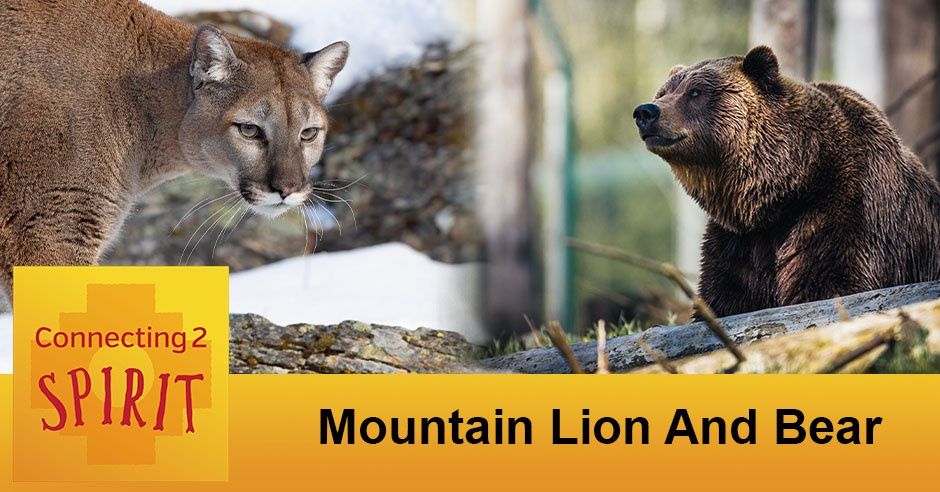 Certain connections creep up to us in moments where our heads are filled with so many thoughts. It is as if there are forces that bring us back and snap us out of whatever is distracting us. Susan Norton found this connection at a time of great transition in her life. She shares how she went face to face with a mountain lion and a bear in the Rocky Mountains.

Listen to the podcast here

I had a little bit of a troubled childhood like a lot of people. I remember on several occasions, I'd be sitting outside, the hummingbird would come, hover directly in front of my face, stay there and looking at me. It was in my energy. I could feel it. We'd look at each other for a while and it would go away, then it would come back again another day. This happened frequently that I thought this happened to everyone. I think this was the beginning of my shaman path.

When I was going through a difficult time in my life, at a time of great transition, I was in the Rocky Mountains for one night. I believe it was Estes National Park. I’m outside the park with a friend and my brother. They went to bed and I was walking alone in the dark street at night. I was focused on what was going on with my life. I walked down the road and a car came. I didn't want to be seen for some reason. I jumped into the bushes and hid until the car went away. I realized, “That's not safe because there could be something in the bushes.” It’s okay. What was I afraid of? I was hiding and not wanting to be seen at night by humans.

I was walking down the road towards the national park and it was dark. I didn't have a light, flashlight or any gear like that. It was a beautiful night and I said, “It's time to go home.” I started walking back. I turned around and started heading back to the little lodging along the dark road. All of a sudden, I felt these fingers touching the back of my leg. I thought, “I should turn around. What is this?” I turned around and there was nobody there. I looked down the road and a few hundred feet away from me into the one spot of light and the one street light, came a mountain lion. It came into the spotlight and turned away from me and headed toward the national park.

How could a bear move that fast and that quietly and it was gone?

Its tail was as long as the body and it was magical. I turned around. I began to walk towards the national park toward where the mountain lion had gone. I knew I wasn't going to follow it. I wasn't going to go off the road, but I was drawn to this beautiful spotting. It's like a friend tickled the back of my thighs and said, “Turn around.” In that exact moment, a mountain lion came out into that spot of light. I walked for a bit and I didn't see it anymore. I started to say, “It's time to head back. I'll go back to the lodging, the little cottage.”

I headed back toward the cottage and I was walking for a bit. At one point, I stopped moving completely and stared into the woods as if something called to me. At that moment, I stopped, there was total silence and then there was this noise in the wood. I thought, “It's a bear.” I didn't see it. I had a feeling that there was a bear in the woods close to me. I thought, “I'm not going to go into the woods and chase it.” My goal was to see a bear but seeing the mountain lion, I was happy.

I started heading back to the cottage again. As I get closer to the cottage, it was still a very dark road. I began to think, “We've got to pack up. We're going to see my friend, Ellen. This is it. From here, what are we going to do?” I was on holiday in Colorado. I was living in Ithaca, New York at that time. I was spending a few days in this area. I was leaving this national park area the next morning. I was deep in thought. All of a sudden, I walk up and almost bump into something. I growled and there was this big bear growl much better than my growl and I took a step back.

I thought, “It's a bear.” My eyes adjusted. It was a black bear. I had walked right up to a black bear in the dark and I growled first. When it growled, I felt, “It's a bear.” As if I had almost bumped into my sister or a loved one. I was oddly calm and I backed up. I took a few steps away. I looked at it and I'm like, “Finally, I get to see my bear.” It was at a dumpster. It had its nose in a can of beans or something so it didn't smell me first. I thought, “Finally, I get to see my bear. I'm very close to it.”

I was a few steps away. I was next to a van and right there was the cottage. I could have run inside and I didn't. I thought, “I'll take a picture.” I turn on my digital camera, but it was facing me so the light wouldn't upset the bear. I began to walk toward it but in a circular way so I could take a nice picture. It was totally fine with me being there. It was calm. It proceeded to do what it was doing. It didn't mind me at all, not a bit. I walked toward it. Slightly at an angle, going a little bit around it and spiraling a little bit closer to get this beautiful picture. I said in my sweetest woman's voice that I had, “How are you?”

In a shot, that bear took off fast and silently. I was like, “How could a bear move that fast and that quietly and it was gone? I didn't get my picture.” I had this experience that I was face-to-face with a bear in the dark. I growled first and it growled in return. In that same night, I had a mountain lion cross my path and I was face-to-face with a bear. I was on the shaman's path though I had yet to take any training. The training was to come shortly later.

“Because the world of Spirit is a great place to be”

All Designs, Images and Content Copyright © 2014- 2022 Shamanic Services by Susan. All Rights Reserved.