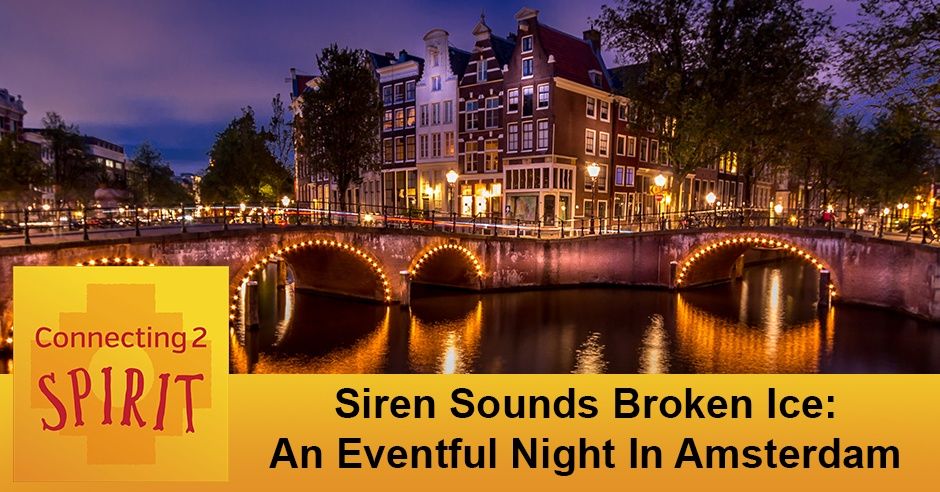 Spirits can guide us towards a greater and bigger life if we allow it. Most of the time, they give us signals that could change our lives. This is one big realization for Susan Norton. While living in a caravan in Amsterdam, Susan heard an ambulance and wondered if her child was ok, then she got the surprise of her life and important teaching. Join her as she recounts this story.

Discover Ways For You Of Connecting To Spirit

One day when I was living in Amsterdam Holland, something strange happened. I was in a small caravan living on a little Island in Camping Zeeburg in Amsterdam. I was living there with my young son. One day I'm sitting by the little window in the caravan looking out. It's wintertime in Holland so it's icy and cold. I hear ambulance sounds. I'm looking, “Where is the ambulance? I don't see the ambulance.” I can see the road, there is no ambulance. I have a feeling like, “I wonder if my son is okay.” I didn't know what to do. If he's sick or something, I guess I'll know for next time. I hear a knock at the door.

My young son, about four years old is standing at the door, completely frozen and wet. He had fallen in a slough. He'd fallen in the canal and was under the ice. Luckily there was some gypsy children around and they saw him fall in and they pulled him out. He came back to my door and I let him in. I was happy that they saved him because he would have surely died. It was cold. I thought, “The next time I get a message like that. I will pay attention as I promised.” Those siren ambulance sounds were spirit messages. There was no ambulance. It was spirit or my guides trying to get my attention to take action. I didn't take action at the time. I didn't know quite what to do.

When something happens, stop and take time to enjoy the moment.

I didn't realize the message of the sounds. I was self-centered at the time. I was smoking a lot of dope. I was not present, but that message got through. I thought, “The next time I get a message. I'm going to pay attention. Thank you that my son is spared. These gypsy children were loving and kind and present enough that they pulled him out from under the ice.” He goes, “Mom, I was under the ice. I was looking up. All I saw was the ice above me, completely under water.” Thank God he survived that. Sometime later I was in the caravan again. My son had to walk to the shower area, which was a different part of the campground, which was sparsely inhabited because only a few people were allowed to live there over the wintertime.

I was one of the people that was allowed to live there. There was only 3 or 4 families. I had given him the shower coins and he knew the routine. He'd take his little basket of shower items and he’d walk to the shower. I'm in the caravan, at the little home on wheels. I had told him, I said, “Son, if you ever need me, call me in your mind and I will come.” He goes, “Okay, cool.” He's in the shower, this young boy, about four. I get a message, “Mom, come.” This time, because of what happened with the ambulance and falling to the ice event, I said, “I'm going to come.” I go to the shower. He is in the shower and he says, “Mom, thank you. You heard me. You got the message. Great.” I said, “What happened? Why did you call me? What's going on?” He goes, “Mom, I heard noises. Somebody was in here and I was scared. I called you like you said. You got the message. Thank you.” I was happy that he knew to call me that he was okay and that I was able to receive that message from him.

I was happy that I was able to take action because the painful experience of the first time when he could have died and I wouldn't have taken any action. I use that to do better the next time when I got a message. Sometimes what is nice about making mistakes is they hurt. It's hard to make mistakes. If I can make a mistake, learn from it and have an awareness, I can do better the next time if I learn from it. There's one more story. This is later on in life. I was back in the United States. We were camping in this beautiful Hammond Hill State Forest. On my way back, I was going to meet my partner at the time. I was rushing back from the woods. I had a tendency then of always running late, being late for things.

This was some years ago. I wasn't as organized as I am. I was a bit of a goofball. I'm driving home, meeting my partner. I'm running late and I'm leaving the woods. I see this big animal on a branch, on a tree and it was black. I'm like, “What is that? I'm late. I have to go. I'm already in trouble.” I drove away from the animal on the side of the road that was on this branch. I regret that I didn't stop, that I didn't see what animal that was. Why didn't I stop? How sad that I put my being late or in trouble in front of looking at an extraordinary animal, this was not an animal I had seen. I didn't know what it was and it was big.

I regret it because when these are extraordinary times and something happens, that's out of the ordinary, to take the time to enjoy that moment and look. I never did know exactly what that was. In some years later, I was driving and an unusual animal was crossing the road. I knew enough to stop. I pulled over and I looked at it. I didn't know what it was. It was big. It was dark. The back legs were taller than the front ones. It was unusual shape. I got home and I had to look up what was that animal. It's called a Fisher. A Fisher is an extraordinary animal that can climb trees and it can eat porcupines. It was unusual because they exist, but they're hard to spot. That might have been the animal that I saw years before in the tree, but I don't know, but the message is I knew enough to stop. My message to you is when something happens, enjoy it. Stop, because the things that I regret the most are the precious moments in life, where I didn't stop. I didn't take time to enjoy the moment. I hope you enjoy your life, stop and enjoy your moments, blessings. Thank you.